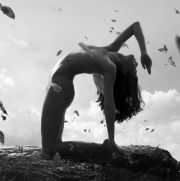 
Year: 2020
Mr. Noel introduced me to the secrets of restoring ancient images, that is how I was born as a photographer, drawing with charcoal, anilines, and airbrushing. In late adolescence, that man sat me in a chair to listen to classical music while learning to restore (he was a fanatic, he knew the entire musical stock of the cultural station, we played to see who recognized the piece first, I eventually hit one or the other ..,)
The reconstruction process was so delicate that one image could pass in front of me for a week, obviously it taught me what patience means to achieve perfection in the details, I learned to manipulate, retouch, and intervene fearlessly the image., The other Part of the work consisted of developing and enlarging the images, in this way I discovered how rich it was to spend a lot of time in the laboratory, one day at night and went out the next day at night.
He went to his native land, Colombia, to die in the arms of his daughters and dear wife, he left me the responsibility of the clients we worked for (Zerdas, Hoyos and several other photographic studios), Time took him away , but also took my gratitude which I could never recognize eloquently.
I had never grabbed a camera so I decided to take a course, in the beautiful gardens of the USB Fernando Carrizales was in charge of teaching me how romantic life can be behind it ... Beautiful and bright time, the workshops began on Saturdays at 8 in the morning and they ended very late, we would watch movies to later analyze them, we would reveal in their magnificent laboratories, and we would take photos at the first thing that moved ...
Ricardo Armas taught me the most rigorous techniques for the correct use of lighting and photographic equipment, his workshops did not last long but they were always full of tons of information.
Finally, the person in charge of directing me to the world of art, and the understanding of the image reading was Edgar Moreno, with his magnificent imagination, and that overflowing sense of life that characterizes him, gradually led us to those little tangible boundaries, but delicious in inspiration.
I try to understand the light every morning ... something so complex can only be unraveled and demystified with time and soul.

That border between the real and the imaginary motivates me to see the world from introspection and reflection ...
Being rebellious takes the whole life,
erase the privileges of the skin,
enroll in the loneliness of disagreement,
leave the usurpers behind ...
There is no prize to a rebel
beyond being able to water its flowers at the appropriate time,
go out to feed the birds one morning where the capital devours.
The rebels know what the prizes are made of,
they reject the crushes thrown by the hand of the oppressor.
A rebel has life as her only prize, because no one appropriates her, no one usurps her,
because it is the only land of each corner where he sleeps.
His rebellion always manages to shelter the discouragement of progress
and if by the way a rebel has joy in solitude, she has conquered the world.

Fill in the following form to contact "Nicolas Serrano" (Artenet will receive a copy of the message).

If you are interested or want more information about this work, get in touch with "Nicolas Serrano" (Artenet will receive a copy of the message).

Make an offer to Nicolas Serrano for Harmony

Verified icon indicates Artist "Nicolas Serrano" You have successfully completed the Artenet verification system to establish your identity with us. In addition, it provides the highest level of customer service along with fast shipping.